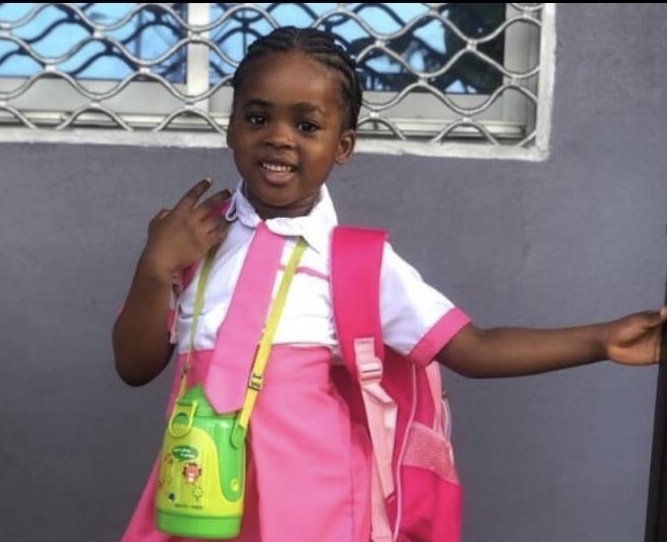 Calm has returned to Buea, the capital of the South West Region, 24 hours after a gendarme officer shot and killed  six-year-old Carolaise Enondiale on her way to school, on Thursday October 14, 2021.

The city woke up to a timid start this October 15, but by 10am activities had resumed. A good number of shops opened their door for business as usual and cars which were parked the previous day are now circulating.

But yesterday’s incident has taken a toll on many parents who for fear of the unknown, kept their children at home. Hence, one day after little Caro’s death, schools reported significant absences.

According to a press release from the Defense Ministry, Caro was killed by a Gendarme Officer “in the Bokova neighborhood, not far from the Buea Central Market”.

The release states that “the national gendarmerie filtering station installed in Bokova, stopped the Toyota Brand vehicle, PICNIC Model with chassis registration number Ch 068122. Refusing to comply, the driver continued in his momentum by accelerating to the Molyko Omnisport Stadium, where he will be caught by the two gendarmes launched after him.

After the usual identification procedures, an inexplainable verbal brawl ensued between the two gendarmes and the driver who was firmly opposed to the search of his vehicle to the point of initiating a new escape manoeuvre”.

In an attempt to immobilize the car, the press release says the gendarme officer fired the “warning shots” that took the life of little Caro. She was fatally shot on the head, and her brain gushed out.

After killing Carolaise Enondiale, the angry population pounced on the gendarme officer, executing mob justice and lynching him to death on the spot.

Two lives were lost in one day.

In the minutes that followed, the city was in mourning. Men and women, both young and old left their work places, some closed their shops and all took to the streets to protest the killing.

They blocked the roads, leaving private cars and taxis with no option than parking, and waiting for when they can freely circulate without fear of what may happen next.

The angry crowds paraded the streets of Buea with the corpse of the little girl, denouncing such barbaric acts. They headed straight to the Governor’s Office where they demanded for an end to violence and indiscriminate killings by security officers. Governor Okalia Bilai, acknowledged something had gone wrong, and said the “culprits will be brought to book”.

Following the shocking incident, Cameroonians from the country’s nooks and crannies, and those abroad have denounced the killing on social media platforms, asking the government to bring an end to such heart-wrenching killings. Others have simply said a prayer for her grieving family, asking God to grant them fortitude to bear the loss.

On October 15, the Bishop of Buea , His Lordship Michael Bibi, issued a a statement stating “ I join my voice to so many others in condemning the horrific shooting of a car that led to the death of a child simply because the driver did not comply with security checks. I also condemn the killing of the Gendarme Officer who committed the act by the mob because no one has the right to take away human life”.

Late Carolaise Enondiale, a class one pupil of the Catholic University Institute of Buea Academy of Talents (CUIB A&T) Primary School was laid to rest in the evening. The Bishop of Buea , His Lordship Michael Bibi says the Diocese is preparing to celebrate a mass for her.

One day after her unfortunate demise, Cameroonians have continued to mourn with the family, calling for an end to sustained violence from security forces.
The country’s Defense Ministry says “local administrators and the Defence and Security Forces will open investigations to shed more light on, and establish responsibilities in this doubly fatal incident”.